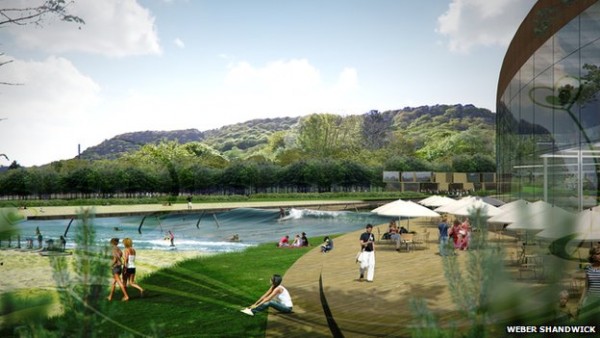 The attraction will be capable of producing 6ft man-made waves

A new multi-million pound surf attraction that could transform a former aluminium factory site in the Conwy Valley has been unveiled.

Conwy Adventure Leisure is behind the Surf Snowdonia project, which aims to create an outdoor wave centre and 100 new jobs at Dolgarrog.

The company is about to submit a planning application for their final proposals.

A community consultation is being held on Wednesday.

Residents will be given the opportunity to learn more about the regeneration plans and the first images of what the new surf attraction would look like have been released.

The attraction would aim to offer an authentic surfing experience with technology creating man-made waves.

The creators are based in San Sebastian in Spain.

Managing director of Conwy Adventure Leisure Steve Davies said: “We’ve done our homework and we think this facility would attract 67-70,000 visitors [a year] and not just surfers but family visitors.”

“Surfing is already a cold water sport so we’re not trying to turn Dolgarrog into Hawaii.

“Currently it’s surfers wearing wetsuits chasing waves, which may or may not come, but we’ll be offering 6ft, consistent waves, so the customer gets want they want.”

Mr Davies said if everything goes to plan the surfing lake could be open by the summer of 2014, with the rest of the facilities open by 2015.

Dolgarrog Aluminium, which employed 170 people, closed in 2007 and an action group was set up to develop the site.

“It would be a unique attraction, drawing on a new market with many potential economic, employment and tourism benefits,” he added.

“The Dolgarrog site is immensely important within the Conwy valley and it is important that we see it brought back into active economic use in a way that supports the county’s economy in a sympathetic way, yet also brings something new and unique to the area.”