last weekend the WSL along with Kelly Slater put an end to all of the speculation and assumptions of how a wave pool version of a World Tour Event might be. The idea that the perfection of the wave itself would make for an uneventful or lackluster surf contest was far from the truth. Especially if you were watching the event live.

The event basically got started on Instagram last week for spectators. Everyone’s favorite surfers, including those that weren’t surfing the event, showed up to Lemoore and started pumping out training clips. Griffin Colapinto, still hot from his performance over in Australia had some of the best waves that anyone has ever seen ridden at The Ranch.

Day 2 @kswaveco . This will never get old! Thank you @wsl for sending me out here and @kellyslater for making all this happen! 🎥 @jacobvanderwork

However, once the event got going on Saturday morning the first bit of excitement was an appearance by Tom Curren. Three waves were had by Tom. Each one showing off his classic, elegant and original style with Kelly zipping around on the jetski acting as Tom’s board cady with Raimnana.

The contest started after Tom departed from the lineup and moved quickly through to Run 3. Here is where the event started to dish out surprises. The World Team moved into third place, tying with Team Australia, who bosted Mick, Stephanie, Wilko, Tyler, and Parko. Not taking anything away from Team World but on paper most would’ve put their money with the Aussies. Both teams elected one male and one female to surf the left and the right. This would decide the final three teams.

Team World sent out Jordy, from South Africa and Paige, from New Zealand to match up against Wilkinson and Wright. Just like in the ocean, their combined, two-wave score would be the deciding factor for which team would head to the finals. 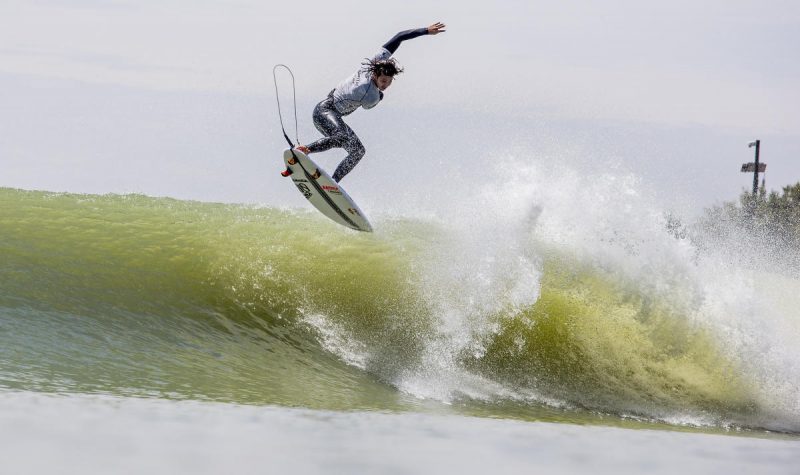 Jordy Smith on the first air of the event. Photo: WSL / SEAN ROWLAND

If you had your money on the Aussies you were sorely disappointed. Matty Wilko opened it up with a 4.07 for Team Australia, which was not enough. This forced Tyler to come up with an impossible score. Not because Tyler can’t get a score, but because the score was impossible to get — a 10.5.

The always cheerful Stephanie Gilmore expressed that, although it would’ve been great to win the contest, the pleasure lies in the experience.

“Even though it’s a little disappointing to not be in the Final, it was cool to be here and see how it all works,” she said. “To see the fans out here and how the team aspect comes in was really positive. This opens the floodgates into a whole new realm of arenas and events in controlled conditions — which is our love-hate relationship with the ocean and not having waves when we want. But, as long as there’s a really good balance between this and the ocean, I think the two will complement each other really well.”

Moving into the final round was Team USA, Team World, and Team Brazil. While Team USA may have bosted Kelly as their leader, Team Brazil had the Brazilian storm, as well as one of the only guys that have ever been able to properly get the goat… Gabriel Medina.

Everybody was on fire but Brazil was just simply oozing with pride and power maneuvers.

That didn’t cause Jordy or Paige of Team World to shutter. The big guy from South Africa opened it up with a 9.27 while Kanoa, from Japan, also cracked into the excellent range with an 8.93. That proved to be the two gems that gave Team World the first ever WSL Founders’ Cup of Surfing victory.

The fact that this event went down at all is a big deal. Just five, or even four years ago, before the unveiling of Slater’s water creation, the idea of this event being a WSL event would have been a joke. Kelly has been working towards this wave for the last decade. The energy and tone that was displayed by Kelly were that of someone who has accomplished their mission. But that’s not it. Surely, this is the beginning of a very long and prosperous road for wave-generating technology.