Slater finally opens up about his manmade wave in SURFER Mag

It would be hard to fathom just how much time surfers have collectively spent watching and re-watching the video of Kelly Slater surfing his perfect artificial peeler. At this point, we probably have every turn, barrel, and air committed to memory. And it’s not at all surprising that the video has resonated so much with surfers. We’ve all dreamt of a future when man-made waves could be built to our lofty standards of perfection.

Well, it seems that the future has arrived. Kelly Slater explains how we’ve come this far and where we’ll go from here. 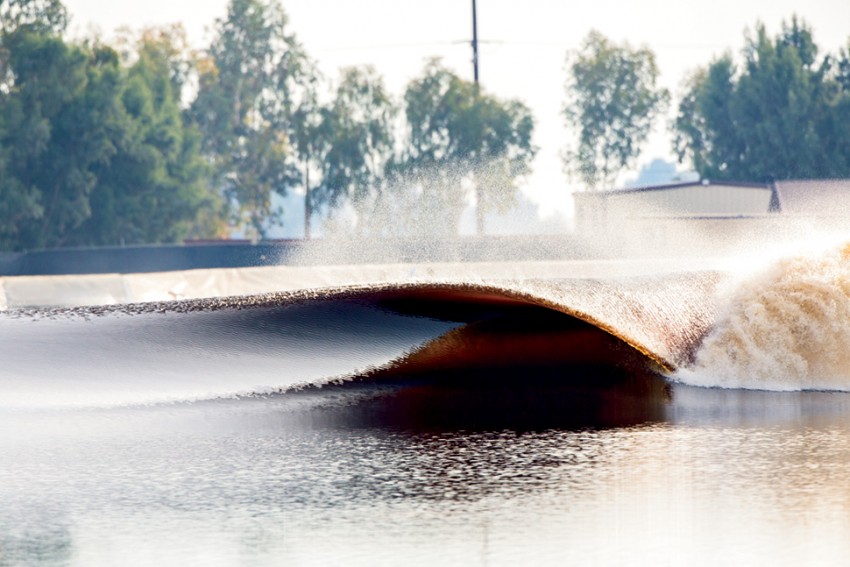 Kelly’s Wave, not a drop of water out of place — the engineers made sure of it. Photo: Glaser

TP You said that this has been about 10 years in the making. What was the catalyst for you? What made you want to get involved in creating man-made waves?

KS I think we all have this fascination with surfing a “perfect wave,” and the idea of building one where we control the parameters is nothing new. When I first surfed wave pools as a kid, it was a novel idea. I tried them all and they were fun, but they left a lot to be desired. When I was finally exposed to the endless surf-ring concept, it all clicked for me. I thought, “I have to do this.” My mind became absorbed with the idea of creating a wave comparable to those found in nature.

TP Being the first to create a man-made wave that rivals any ocean wave couldn’t have been easy. What were some of the biggest challenges you and your team faced?

KS We looked at the information that was readily available and it fell short of our expectations, so the biggest challenge was developing our own scientific approach. That meant hiring a first-class team of scientists and engineers specializing in fluid dynamics, which covers everything about waves and water movement. There wasn’t a knowledge base out there that we could simply plug into, so we had to create our own, and we took a formal approach toward understanding the physics and built a research lab to create this high-performance wave. 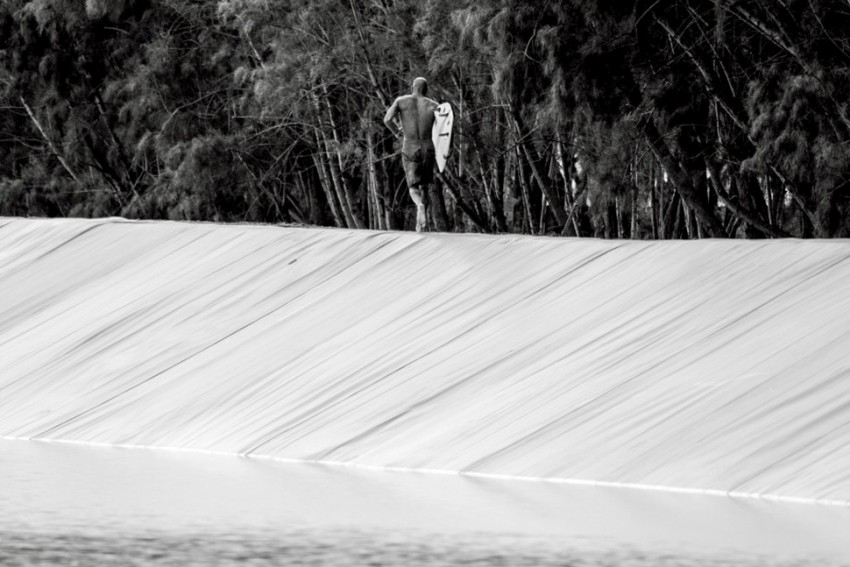 Although the pool temperature was in the 50s, Slater was dead-set on being the first surfer to trunk it at his artificial wave. Photo: Glaser

TP So how the heck does it work? How would you explain the basic concept of your wave to an average surfer?

KS We use something similar to a wing on a plane, called a hydrofoil. When moved through water, it generates a swell similar to those found in the open ocean. We combined this motion with our proprietary scientific formula and came up with the exact bottom contour we needed to create the wave I envisioned. That’s about all I can say now, but there are endless variations possible when you apply our science and engineering in the right way. In the film, I said it’s a freak of technology, but it’s actually more like a solution with technology.

TP You’re known for pouring yourself into everything you’re involved in. How hands-on were you in the making of this wave?

KS This is a passion project for me, so I wanted to be involved throughout the entire process. I’ve been lucky to have a team that has the same expectations for this wave that I do. The whole group understood the vision of having a top-quality wave, even though it may be above some surfers’ ability level. We believed we needed to do that to truly be on a different level than anything before us, especially since we can always scale it back to make it easier to ride. For me, simply having the right people involved has been the biggest gift in all of this. I’m really proud of our team’s accomplishments.

TP In the video, it seemed like you were ready to jump out of your skin while watching that first wave roll through. Can you tell me what was running through your mind?

KS I had known the wave was working for a few days when I was in Fiji, because my team on the ground was communicating to me what was happening during the initial testing. I knew it was good, and I was having trouble not telling everyone about it. So after a week of trading photos and film clips over the phone with my partners, I arrived the night before my first wave and had trouble sleeping. It was so cold that the pool was steaming in the morning, and there wasn’t a breath of wind. To see something you’ve worked on and dreamt about for so many years becoming real in front of your eyes is really
hard to describe. 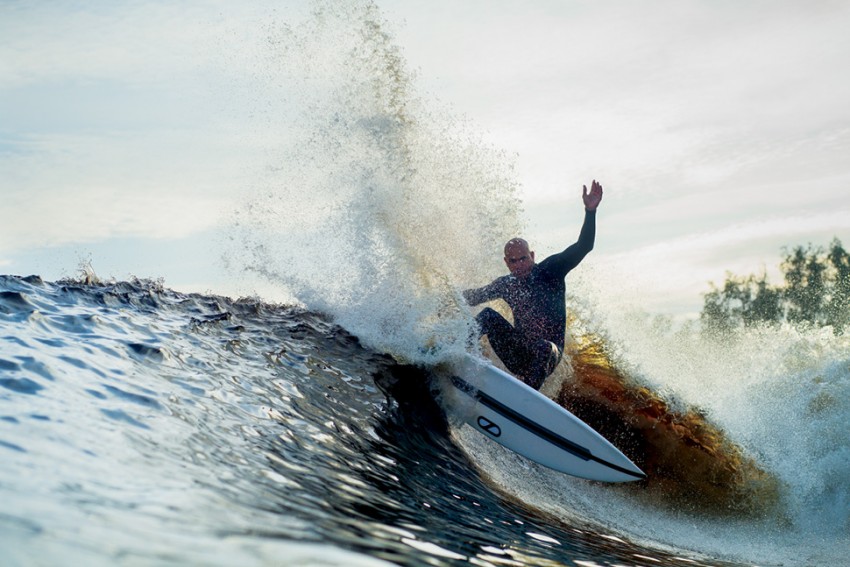 One of the obvious benefits of artificial surf is the uniformity of the waves, enabling a surfer to anticipate sections and work on specific maneuvers. Slater, feeling out the bowl. Photo: Glaser

TP In terms of the speed, the way it pitches, and the overall feeling of the wave, is it pretty similar to an ocean wave, or is there a noticeable difference?

KS There are differences simply based on natural curves and imperfections of the environment in the ocean. But with our wave, the energy is there; it’s powerful with plenty of speed. And there are still some things to figure out when you ride it, so in that way it’s similar to deciphering an ocean break.

TP What do you think this means for surfing? How much potential do you see for this to change our sport and our culture? 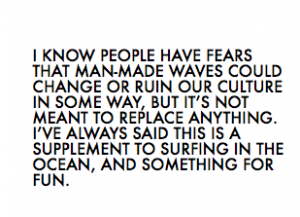 KS Well, you’ll obviously be able to practice very specific maneuvers or test boards, fins, etc. There’s no rush to catch the next set, because another wave will push through exactly like the one before it. I know people have fears that man-made waves could change or ruin our culture in some way, but it’s not meant to replace anything. I’ve always said this is a supplement to surfing in the ocean, and something for fun. I guess it could help the sport grow more quickly, similar to the way skateparks have grown skateboarding, and the potential for the Olympics can’t be overlooked.

TP After that session at your wave, I’d think it would be hard to leave and go back to the reality of surfing crowded lineups. Was there any kind of artificial-wave hangover?

KS I surfed the wave just before coming to Hawaii, and of course I wanted big barrels at Pipe, which is always crowded. But I actually felt like my froth level was balanced out. Now I know I can always go get my fill of fun waves in the pool
and be more relaxed when I’m around crowds in the ocean. This wave showed me how much surfing is a release for me. We all want our space to have fun and catch a few good waves to calm ourselves down. I honestly believe this could make people happier in the ocean, knowing they can go somewhere when they want to get barreled without people in their way. I think about my friends that live in Santa Barbara, where a lot of swell is blocked by the Channel Islands, or in Florida, where they wait for waves all summer. How much fun would they have on this wave during their downtime? I also feel like it actually increases the desire to travel more to find new waves and different experiences. Surfing is all about the experiences we have, and having this wave available settled my nerves a lot knowing I can go and have the physical enjoyment of surfing anytime. But the travel aspect of surfing—experiencing the world—is something that can’t be replaced.

Kelly Slater at home in the barrel of his manmade wave in Lemoore, CA. Photo: Kelly Slater Wave Company

Read more on SURFER Mag or pick up the March 2016 issue for what will surely be a collectible in the realm of surfing outside the ocean. 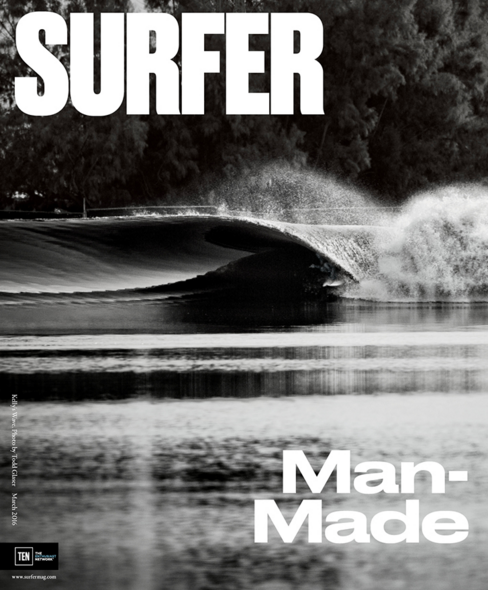