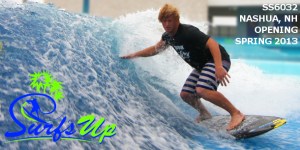 NASHUA – This spring, the nation’s largest standing wave machine is expected to attract expert and novice surfers to Nashua.

Currently under construction, Surf’s Up New Hampshire is being built at the existing SkyVenture New Hampshire site at 3 Poisson Ave.

“We can already teach anyone to fly, now we can teach anyone to surf,” said Rob Greer, who owns SkyVenture with his wife, Laurie. “SurfStream is a tremendous value proposition with broad appeal. That’s what convinced us to invest, and that’s essential for our bottom line.”

American Wave Machines Inc., the leader in artificial wave technology for surf parks, announced this week that SurfSteam is expected to begin operations this spring, possibly by April.

Surfers will be able to experience a 5-foot barreling wave with 32-feet of face to carve on in an all-season indoor multi-sport venue, according to Bruce McFarland, founder and CEO of American Wave Machines Inc.

“SurfStream is the most fun water ride there is,” said McFarland, praising the enormous system chosen by the Greers for the indoor facility. “It is very cold to surf outside in New Hampshire. The water inside is going to be in the low 80s, and so is the air.”

McFarland expects that people will travel a far distance to try the new SurfStream technology, including experienced, hard-core surfers as well as individuals who have never stepped foot onto a surfboard.

“Regardless of what is going on outside, people can walk around in their trunks and bikinis and be completely comfortable in and out of the water,” said McFarland, adding an open air roof system is being built to allow for sunshine when the weather is nicer.

SurfStream is a gel-coated fiberglass modular system that can be built in different shapes and sizes to produce different size waves. In basic mode, the machine can be used by inexperienced customers who are trying to surf for the first time.

However, it also has the capability of producing barreling waves for professional surfers, according to McFarland. He said the machines range in price from $350,000 for a small model to a few million dollars for the larger systems like the one being built in Nashua.

Learning to surf in the ocean can be challenging because it takes a lot of effort just to get standing on a board. With the SurfStream, McFarland said people can often stand and ride on a surfboard fairly quickly, often during the first session.

“The system allows that training and skill development – it can be a thrill ride,” he added.

Nashua is an ideal location for a new indoor surf park, according to McFarland, who said it is close enough to Boston to attract a large number of potential clients.

Furthermore, many daring skydivers are often willing and excited to try something new like surfing. The Greers have already received a tremendous amount of feedback from existing clients ready to begin a new adventure in the water, he said.

SkyVenture, and now Surf’s Up New Hampshire, are located on Poisson Avenue off the Daniel Webster Highway behind Best Buy.