Surf’s Up, and the Ocean Is Nowhere in Sight

AUSTIN, Tex. — What if everybody had an ocean, across the U.S.A.?

A tentative answer to that question took shape on a recent morning in a giant artificial body of water within 160 acres of cactus-studded former ranch land here in Hill Country.

Every few minutes, about a half-dozen surfers paddled their boards into the shimmering celadon waves that approached. The surfers would then stand, turn and crouch to try riding the water as it crested over a reef and curled across the lagoon in head-high wedges before breaking, only to reform into mellow little rollers of the sort you might find in Waikiki.

It was another day of test runs at NLand Surf Park, a much-delayed attraction under development by Doug Coors, a scion of the beer-making family.

The idea of surfable, potentially profitable artificial waves is not new or unique. Kelly Slater, professional surfing’s most decorated champion, has grand plans for the big barrel -wave pool he has developed in California’s Central Valley — the first of what he hopes will become a global collection of elite training and competition centers built in partnership with the World Surf League, the leading professional tour.

NLand and Kelly Slater Wave Company are just two of at least a half-dozen outfits striving to deliver surf to the landlocked, while proving to skeptics that artificial waves can favorably compare to those made by Mother Nature.

Mr. Coors’s NLand, envisioned as a chain of surfing parks, has reached this final testing point after decades of effort and millions of dollars of investment. And it is part of a long global quest by many that has left money and dashed aspirations scattered like flotsam on the beach.

Proponents say, though, that inland surfing’s moment may have finally arrived.

With surfing set to become an Olympic sport at the 2020 Tokyo Summer Games — even though the competition is planned for the ocean — developers of surfing parks see the same sort of publicity and motivational opportunity that the Olympics have provided for snowboarding and skiing. 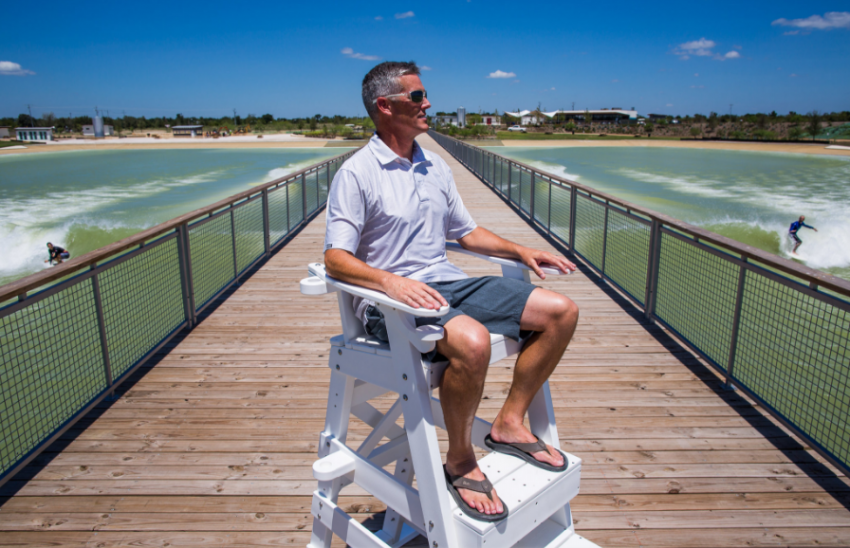 Doug Coors, the founder and chief executive of NLand Surf Park, said he would be happy to build a wave park in “every corner of every city.” Photo: Drew Anthony Smith for The New York Times

“Now, more so than ever in history, the world is talking about, investing in and developing man-made surf destinations,” said John Luff, founder of Surf Park Central, an online publisher that is helping to plan the second Surf Park Summit industry conference in Orlando, to be held on Sept. 7.

For the multi-billion-dollar surfing industry, the advent of custom-designed waves that arrive regularly and predictably is seen as having the potential to help broaden surfing’s appeal and become something people are willing to pay to experience.

“It takes a long time to become a surfer,” said Fernando Aguerre, president of the International Surfing Association, the global governing body for the sport. “If you’re in the ocean for an hour, and you get six, seven waves, you’re very lucky. Learning to surf is like learning to play the guitar when you can only strum once every 30 seconds.”

Some who have surfed NLand say it feels just like natural waves but with more frequent and longer rides — up to 35 seconds — that give novices more time to properly position themselves and advanced practitioners the opportunity for more maneuvers.

Mr. Aguerre also said that the technology could be suited to use in surfing competitions, with the consistency and flexibility of artificial waves making contests fairer and easier to judge.

Mr. Coors, 48, who took up surfing in Hawaii in 1991, explained his mission as he looked out at NLand’s artificial lagoon, which is about the size of nine football fields.

“I thought, there’s got to be a way to build a wave away from the ocean where people can learn how to surf,” he said. “I’d be happy to build one in every corner of every city.”

First, though, he must get this one open.

That can’t happen until he resolves a dispute in which the county contends that the 11-million-gallon lagoon should undergo the same sanitary procedures required for a public swimming pool. NLand, which has filed a federal lawsuit to press its case, says the lagoon is too big to meet many pool requirements but it employs an elaborate filtration system that meets or exceeds the standards. 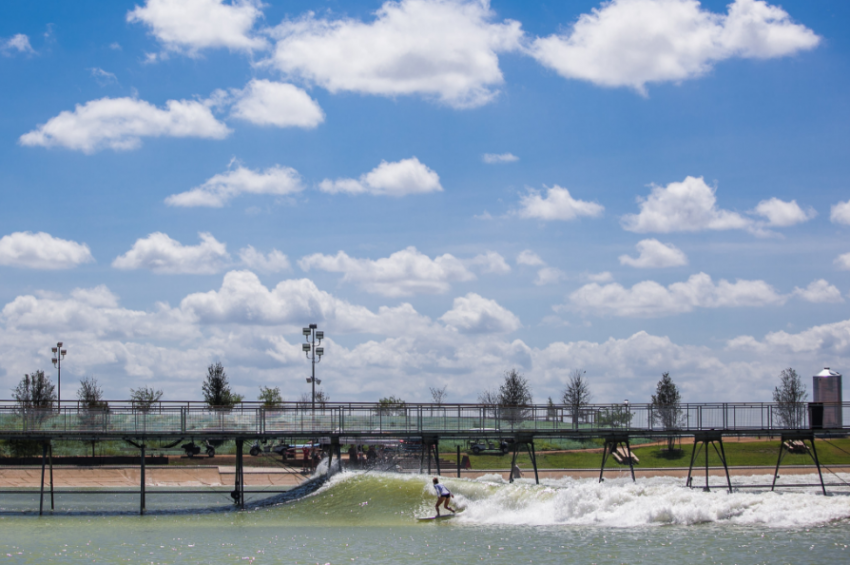 Karen Frisch catches a wave at NLand Surf Park, which is not yet open to the public. Photo: Drew Anthony Smith for The New York Times

The quest to surf on artificial waves has long been challenged by the difficulties of mastering the fluid dynamics, engineering and mechanics necessary to mimic the ocean. And the energy required was often too expensive.

In 1969 the world champion, Fred Hemmings, surfed at the grand opening of the United States’ first wave pool, Big Surf, in Tempe, Ariz. The park remains in operation, but it is open for surfing only an hour a day and is mainly used for swimming.

Peter Townend, who won the first professional world championship of surfing in 1976, was an adviser on Disney’s Typhoon Lagoon, which was built in 1989 near Orlando but seldom plays host to surfers.

Mr. Townend was also an investor in the Ron Jon Surfpark, in Orlando, which was scheduled to open in 2008. It promised to produce saltwater waves eight to 10 feet high and to transform artificial waves from water park attractions into stand-alone operations.

The wave test run at Ron Jon Surfpark was “unreal,” Mr. Townend recalled. “But it tore the bottom up.” Investors lost millions in the failed experiment.

Two California companies, American Wave Machines and Wave Loch, that have found success creating surfable stationary waves that fit into malls, restaurants and water parks, are turning to pneumatics — in which pulses of air push water — for larger next-generation pools with rolling waves.

The newer surfing pools have been made possible by advances in computing, allowing for better simulations of how the water will behave and for more sophisticated controls. Slight changes in timing, pressure or angle of the water can determine whether a wave will form a curling barrel — the holy grail for skilled surfers — or a soft hump that’s easier to ride.

Wavegarden, the Spanish company that designed NLand’s lagoon, is also the architect of the one at Surf Snowdonia, which opened last year in Wales and, despite some early snags, has attracted plenty of customers.

In Texas, Mr. Coors would not say how many millions he has spent to create NLand, but he has devoted more than 20 years to realize the vision, including trying to develop his own surf technology before coming across Wavegarden’s.

The waves at NLand, like those at Mr. Slater’s site in California, which uses its own closely guarded technology, are produced using a hydrofoil. The large blade moves through the water, pushing it into formations as it hits the contoured bottom of the pool.

“Essentially a chairlift motor with a snowplow on it,” Mr. Coors said, the mechanism travels beneath a central pier, creating waves that flow off both sides until it reaches the end, where it resets and runs back the other way. The water comes from a rain catchment and filtration system, and the approach is less energy intensive than older wave-making practices that involved pumping.

Still it takes a lot of energy to make a wave — roughly equivalent to running 10 cars. Mr. Coors is considering installing solar panels to help generate the electricity.

Many surfers are greeting the artificial-wave movement with enthusiasm.

“I’m 100 percent in favor of making more waves — by any means necessary — and relieving some of the pressure on our natural (and overcrowded) surf spots,” Sean MacPherson said in an email. He grew up surfing in Malibu and owns several hotels and restaurants in Los Angeles, New York and Montauk, Long Island, where he surfs now.

But purists worry that turning a quasi-outlaw, peripatetic pursuit into a theme park amusement will destroy its endless-summer romance. One of these is Davina Grincevicius, a videographer who lives and surfs in Rockaway Beach in New York and in Puerto Rico and is the organizer of an annual women’s surf film festival.

“There’s something very exciting and fun to share about surfing that might not translate to, ‘Oh, I was in the wave pool for an hour and I finally nailed it — I did this awesome cutback,’” she said.

Mr. Coors said he hoped parks like NLand could complement, not replace, the experience of being in the ocean.

“Surfing the way it is today is fantastic and I really don’t want to get in the way of that,” he said at the park, as the waves roared, crested and rolled behind him. “The idea is to introduce more people and grow the sport, but do it in a responsible manner.”

Read the original article on NYTimes.com and see more from Diane Cardwell here.