NLand Surf Park is officially closed for the season as of Friday, November 24.

The sessions are through until next year but it seems like NLand  created a little surfing community that will only grow going into next season. This last season at the park was said to be the best yet; NLand Brewery was launched and we all watched as pros showed the full potential of progressive surfing in a park. They received the Facebook Innovation Award from the Austin Chamber of Commerce and thrived from the local and international support. The facility evolved into a family destination as well as a local break for inland surfers and kids of all ages. Introducing people to what any surfer would tell you is one of the most important parts of their lives- surfing. Here we have highlights and details on some of their popular events from this season.

At 9:00 a.m. On May 17, NLand fired off the first wave of the 2017 season. Since the large group of landlocked surfers survived the winter in Austin without surfing their new favorite local break, it was a busy day at the park. People watched from the deck of Blue Prairie- (NLand’s on-site restaurant,) as surfers take their first waves. While the morning saw beginner surfers, the afternoon showcased some of Texas’ more experienced shredders as they found their “sea legs” again.

Heres the first wave of the 2017 season.

This year NLand recruited 50 new team members and coaches. From locals of Austin to transplants from the island of Kauai. These guys and girls offered some amazing sessions as they helped to dramatically shorten the learning curve of new surfers. They launched a video series, “Meet The Coaches,” introducing us to the guys and girls bringing stoke and making it happen at the landlocked beach. On top of having the predictability of the pool, the coaches at NLand developed a learning system which made for a high success rate of achieving good rides for learners.

The team held a free dry-land clinic to teach the basics of popping up, surf terminology, etiquette, and safety. Afterwards, they were invited to sign up and get right into a surf session to solidify what they’d learned on the land. Camille Styles, a local business owner, who gave surfing a go for the first time at NLand explained, “having Ion as my coach really made me feel more comfortable, and having the dry land instruction gave me a little bit of confidence.” She was able to turn that confidence into motivation, going on to say: “I definitely felt like I was really able to think through what we learned through the coaching sessions and I had a couple really awesome rides.”

The park saw some big names come through, showing the possibilities on the wave. “Lost Weekend” brought the likes of Matt Biolos, from Lost Surfboards, along with guys from the team. Eric Geiselman, Jett Schilling, and Eli Hanneman put on a clinic, showing the locals some high-level surfing. The weekend was full of live music, new brews from NLand Brewery and Eric Geiselman even picked up a guitar, showing off his other creative skills. But the Lost Boys weren’t the only pros to make a splash in the pool this season. Serena Neva, a 15-year-old pro, who competes on the WQS had a go at the wave while people stood in the waist-high water with the jaws open.

Mark Healy is “the greatest athlete you’ve never heard of.” He’s a Yeti ambassador, a professional surfer, a freediver, a spearfisherman, and hunter. Not to mention one of the downright most radical guys on the planet. Being that he charges some of the biggest waves in the world, Yeti along with NLand wanted to see how he felt about the surf park. Mark showed up to NLand and transferred his ocean knowledge to the wave pool. Between 4-5 PM he surfed with anyone that booked a session at the time. The end of the day turned into Mahi Mahi tacos from Blue Prairie, as well as beers and stories with the legend himself. 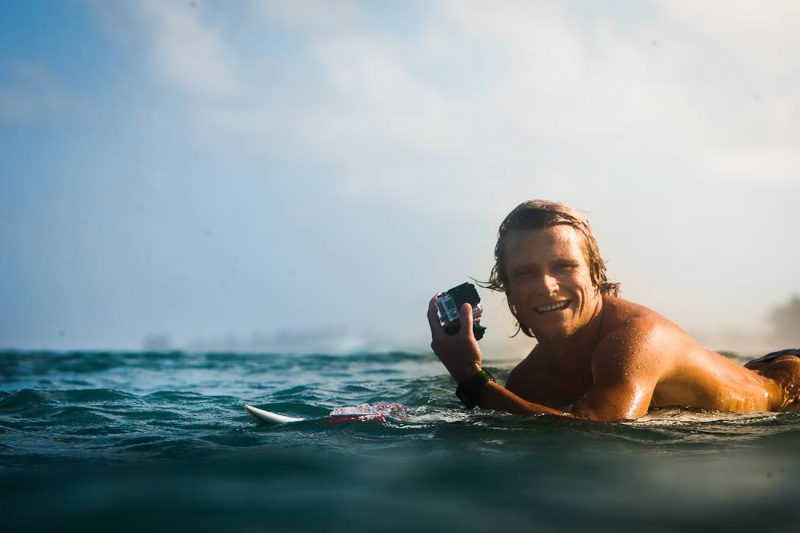 Following a sold-out summer surf camp, NLand and Boneshaker Project partnered up again to provide a weekend surf clinic for groms, every Saturday, September 16th, through October 28th. Focused on creating an environment that promotes positivity, healthy activities, and good role models. On Saturdays, parents signed up their children for three hours of activities with local athletes, games, lunch, surf instruction, and an hour of surfing with an experienced NLand surf coach. Kids that participated in more than one Saturday had the opportunity to advance quickly from NLand’s “Bay Wave” to the intermediate-level “Inside Wave.”

“It’s amazing to see kids who have never surfed, stand up on their boards during that first coaching session. The consistency of the waves at NLand makes for the perfect environment to teach surfing, and share the stoke with a whole new generation of surfers in Central Texas ” says Alex Ecenia, Executive Director at Boneshaker Project.

Chris Burkard’s visually stunning movie “Under an Arctic Sky” premiered at the park just two days before the Austin City Limits music festival. Those who had tickets were able to bring a friend to surf the bay wave. Turns and tubes were shared among friends all morning leading up to the movie. The night concluded with fresh farm-to-table meals, and beers straight from the tap.

October 20th was the official grand opening of NLand Brewery. They teamed up with Live Oak Brewery and St. Elmo Brewing to create a weekend of craft beers and surfing. NLanders enjoyed a brewery crawl, celebrating the art of lager with three local breweries. NLand kept it going with deals all weekend while St. Elmo and Live Oak had deals between Friday and Sunday. A lucky someone went home with a brand new FireWire surfboard of their choice. Ticket holders were able to bring a friend to surf the bay wave for the price of one.

Wrapping up the season was a Halloween spirited event with surfing, live music, yoga, walking tours, and more. Kiddos enjoyed trick-or-treating and Halloween-themed sand toys at the beach and costumes were on full display in and out of the water. Scheduled events went on all day and of course, the day concluded with $6 flights from NLand Brewery. A future fall family classic at the surf park that’s bit more exciting than a standard trip to the apple orchard.

The team at NLand says that they’ve already begun putting in the work to make the 2018 season even bigger and better. More details are to come regarding next season and all the new events in the works. For now, NLanders can revel in the memories of an eventful year at America’s first surfing destination of its kind.