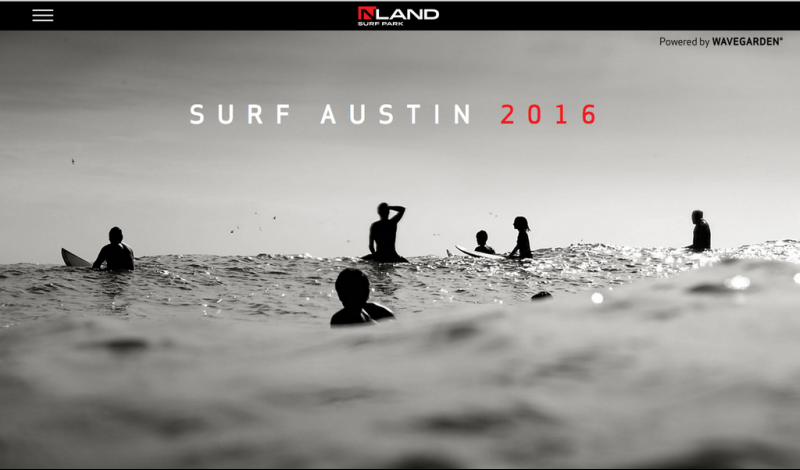 Published on The Austin Business Journal on June 1, 2015

A massive water park catering to surfers backed by a high-profile Denver businessman is being planned for the Austin area, with developers hoping to open in 2016.

The developers behind the project – dubbed NLand Surf Park – aren’t offering too many details outright, but a website set up for the venture touts the project as a 12-acre wave pool with 11 different surf areas catering to surfers of all abilities, novice to pro. Think of it as a wave pool on steroids.

A media conference announcing details of the plans is scheduled for Thursday.

Doug Coors, descendant of Coors Brewing founder Adolph Coors, is named as the founder and CEO of NLand Surf Park. Backing is being provided by Colorado-based 9th Street Capital. 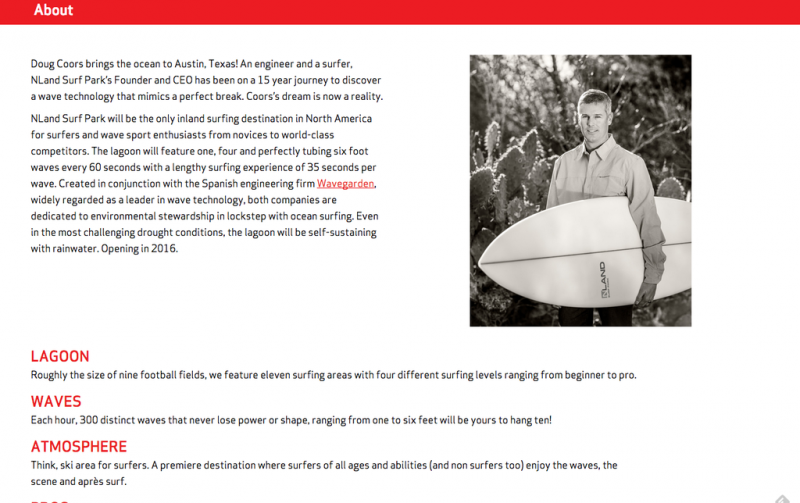 Doug Coors – descendant of Coors Brewing founder Adolph Coors, is named as the founder and CEO of NLand Surf Park

A location for the surf pool has not been disclosed by the developers, however, the Austin American-Statesman reports that permits have been filed to construct a 160-acre water park with multiple attractions at near Austin-Bergstrom International Airport.

A 2011 video produced by Wavegarden demonstrating the capabilities of its wave-generating technology shows surfers cutting across moderately-sized waves in a temporary lagoon set in a grassy meadow.

Also, the NLand website says the lagoon will be filled with “self-sustaining” rainwater, able to operate even in the driest of Texas droughts.

Many popular surf parks are typically small, swimming-pool-sized lagoons that replicate surfing conditions by rushing water over a sloping plane. The plans described on the NLand website would dwarf that project.

In Orlando, plans for a large Ron Jon Surf Shop-branded surf park were floated in 2004, but never came to fruition. At the time it was proposed, development costs were estimated to be $10 million.

In the U.K., developers are planning to open a surf park called Surf Snowdonia this year in Wales. A similar project on the Hawaiian island of Oahu, featuring a 4 acre surf lagoon, is being developed with an opening date set for Summer 2017.

And though it’s not a surf park, in terms of scale and cost comparison, the recently opened Hawaiian Falls Waterpark in Pflugerville cost $23 million and covers 21 acres.

Published on The American Statesman June 1, 2015

A massive sports and entertainment venue is taking shape east of Austin-Bergstrom International Airport, the American-Statesman has learned.

City permitting documents indicate the development will be focused on water sports. Amenities listed include a lagoon, a children’s beach, an adult beach with a Tiki bar and an outdoor concert venue that can accommodate about 2,000 people.

Permits refer to the complex as “Blue Prairie,” but a website identifies the project as NLand Surf Park.

The website claims NLand Surf Park will be “the only inland surfing destination in North America for surfers and wave sport enthusiasts from novices to world-class competitors.”

The lagoon will be the size of nine football fields, with 11 surfing areas.

“Each hour, 300 distinct waves that never lose power or shape, ranging from one to six feet will be yours to hang 10,” the site says.

County records show the parcel was acquired in July 2014. The owner is listed as Austin Park LLC, whose executives include Douglas Coors.

Coors, whose relatives started Colorado-based Coors Brewing Co., is set to be in Austin Thursday to announce a “major sports venue” funded entirely by private investment, according to a news release issued Monday.

“Coors shares the entrepreneurial spirit of his ancestor and brewing legend Adolph Coors and will merge his passion for engineering with the latest in sports technology to create this new venture,” the release says, in part.

Representatives for Coors declined to discuss the venue in advance of Thursday.