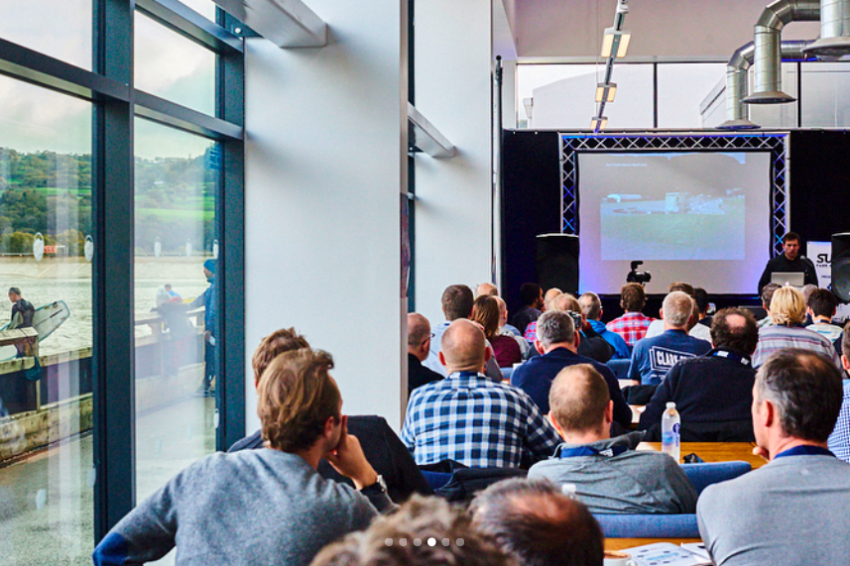 Investors, developers, and suppliers from around the globe converged on North Wales last week for the first ever Surf Park Summit Europe event.

The event was held on October 24th & 25th and co-presented by Surf Park Central and SDSU’s Center for Surf Research. 75 delegates from 19 countries attended the two-day conference, which took place at Surf Snowdonia – a world-first inland surf lagoon which lies seven miles from the sea in the Conwy Valley.

Surf Snowdonia opened to global media interest in August 2015 and is the first inland surf facility of its kind. Attracting more than 150,000 visitors in its first full year of operation (2016), the £18 million facility’s runaway success has helped to cement North Wales’s reputation as the UK’s premier destination for outdoor adventure tourism.

“It’s great to have so many international industry professionals coming into North Wales for this conference. We’ve gained a wealth of insight and knowledge since we put the first spade in the ground in 2015, and we’re looking forward to showcasing our offer and sharing our experience.”

The Surf Park Summit is organised by Surf Park Central and the San Diego State University Center for Surf Research.

“As pioneers in the development of man-made surf destinations and operators of the first commercial Wavegarden, they have a wealth of knowledge to share and have served as one of the biggest catalysts for the surf park industry to date.

“We’re looking forward to our time here at Surf Snowdonia and are excited to be hosting a global gathering of companies and individuals that are at the forefront of shaping the future of surfing beyond the ocean.”

Global travel journal Lonely Planet cited Surf Snowdonia as one of the reasons it named North Wales in its 2017 guide to the planet’s best destinations. Surf Snowdonia hosted the only inland stop on the UK Pro Surf Tour on Sunday 22nd October, which saw Reubyn Ash take the men’s title and Emily Currie scoop the women’s.

Had a great time checking out @surfsnowdonia during the @surfparkcentral Surf Park summit. I got to ride some waves and try a @slaterdesigns 5’8″ Sci Fi that worked pretty good. It’s crazy what’s happening with all these wave pools and definitely looking forward to doing my best @stephaniegilmore imitation in the @kswaveco some day 😜 @kellyslater

It was great having @surfparksummit here this week. How the involvement of wave pools, in the surf industry, will play a part in the future, is really exciting. Here’s @shanebeschen getting loose in the pool during his visit 🍂🍁 •••• #wavepool #surfparksummit #manmade #wales #visitwales #snowdonia #prosurfer #wavepark #surfsnowdonia #wavegarden #carvemag #olympics

After nearly 15 years of music industry conferences, It’s been cool being at one for a very new, very different industry. Oh, and having this machine on the conference site has been pretty sweet too 🏄🏻 #surfparksummit #surfparksummit2017 #manmadewaves #surfing #thefuture #notADE