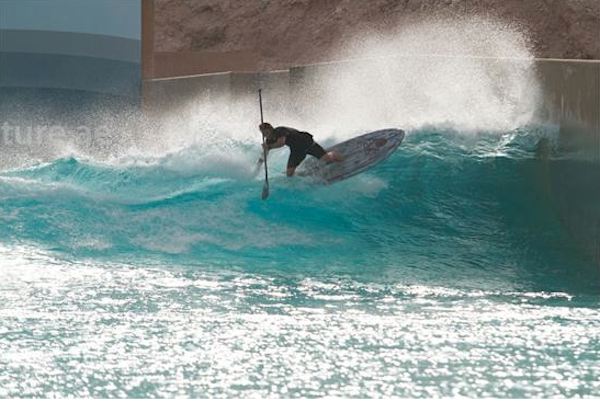 Paddle Surfer Stands Up to World’s Best in Al Ain

Article by: Afshad Ahmed (Read the original article on The National)

AL AIN // Kieren Taylor is a man who rarely has his feet on the ground.

When the Australian is not in the sky working as a cloud-seeding pilot for the National Centre of Meteorology, he’s on the water practising his stand-up paddlesurfing moves.

Kieren, 40, who moved to Al Ain from Saudi Arabia three years ago, finds the sport perfectly suited to the local water conditions.

“There’s a large surfing population in the UAE,” he says. “But they do not have a lot of waves to surf. For five months of the year you have waves in Dubai but they are not very good.”

Those frustrated surfers may help explain the sport’s rapid growth in popularity, particularly since the Abu Dhabi SUP club started in 2009.

“It’s reasonably good for fitness as well, especially flat-water paddling,” Kieren says. “Anyone can go paddling around the mangroves; it’s quite versatile.”

This coming weekend, the Al Ain Aussie will be the only UAE resident competing against 19 of the world’s best stand-up paddlesurfers in the Abu Dhabi Surf and Paddle All Stars Invitational, at Wadi Adventure park, home to the world’s biggest wave pool.

The competition is part of the Abu Dhabi Beach Games event.

Among those hoping to win the US$20,000 prize (Dh73,460) is world champion Leco Salazar from Brazil. Also on board are Californian natives Daniel Hughes and Ryan Helm.

Because the waves at Wadi Adventure are controlled, the professionals will be able to pit technical skills against the same three sets of waves.

“The competitors will have a level playing field, so everyone has the same chance to show what they can do,” Kieren says. “If it works out, it will pave the way for more competitions here in the future.”

Spectators can expect to see moves including floaters (surfing the crest of a broken wave); cutbacks (an S-shaped move that turns the nose of the board in on an unbroken section of a wave then cuts back into the surf) and re-entries (aerial moves where the surfer carves through the lip of the surf with the nose of his board).

“You never want to just surf a wave pool, but it’s a good training ground to learn the mechanics and body language of the turns,” says Kieren. “And it doesn’t get better than the facilities here.”

He has competed around the world, including at last month’s world series competition in Hawaii organised by the Waterman League, an international ocean sports organisation.

The league added Abu Dhabi to their circuit at the invitation of the Abu Dhabi Sailing and Yacht Club, who teamed up with Abu Dhabi SUP club, Abu Dhabi Sports Council and Wadi Adventure to hold the event.

Ryley Heffernan, the surf manager at Wadi Adventure, said he expected millions around the world to be watching the surfers online.

“The league will be broadcasting it live,” says Riley. “The last event was watched by six million people, so we expect a big international audience.

“Wave selection is usually a big component in judging stand-up paddling, but it’ll not be a part of the wave-pool competition.

“So the criteria comes down to their execution and performance of new and critical manoeuvres.”

Reiner d’Arnaud, sailing and events coordinator at the Abu Dhabi Sailing and Yacht Club, says enthusiasts do not usually consider the desert in the context of surfing.

“It’s a first in the region and will showcase Abu Dhabi’s facilities, drawing in enthusiasts in the country and from outside as well,” he says.