Lennard Otto is the General Manager at Wadi Adventure in the UAE. Having been with Wadi since their opening four years back, Otto has been instrumental in the growth and progression of the facility. This week we had a chance to chat briefly with him about both the current state of affairs and what the future looks like for the already impressive Al Ain facility. It’s a bright future indeed as big changes loom for both the surf pool itself and the overall scope of facility offerings.

Currently the Wadi Adventure menu boasts kayaking, whitewater rafting, surfing, swimming, climbing, a ropes course, and multiple food and beverage venues. As if that weren’t enough though, within the next 18 months they’re planning to build several large additions, including a skate park, bmx pump track, several full-scale water park features, and perhaps most exciting for us surfers, a revamping of the wave pool to increase output and frequency. 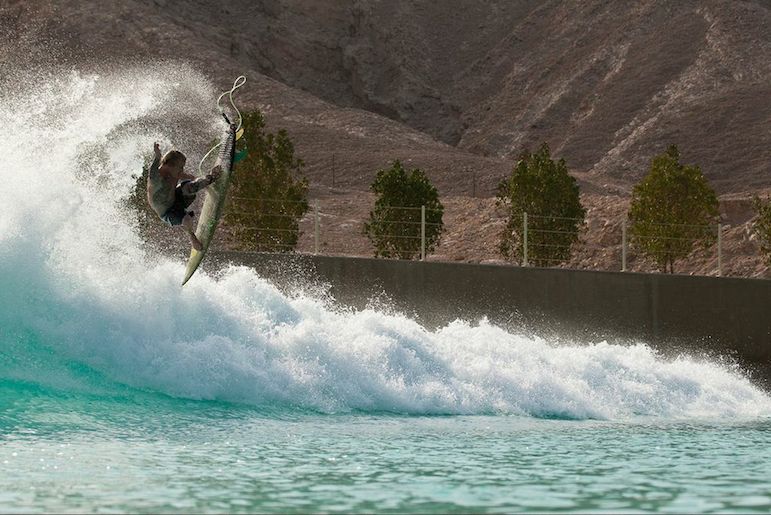 The current demand for the pool is impressive to say the least. With a 95% year-round occupancy rate, a 3-4 weeks-in-advance booking schedule, and zero room for daily walk-ins, a retuning of the park seems fiscally logical. The highest feasible number of surfers cycled through in a given day is currently 72. At this rate, says Otto, they can generate a solid number of users without sacrificing wave time or quality of experience, however, the pool has the very real potential to allow more volume with just a couple tweaks. These would be aimed at diminishing wave refraction and bounce back, thus increasing the frequency of waves and number of daily users. To achieve this end, Otto and his team are considering a couple of options. One of these options is a widening of the grates at both the front and sides of the pool to allow more water to drain and reenter the pump system instead of being reintroduced to the pool as backwash.

The highest single-activity revenue generator for the facility as it stands is the whitewater rafting track. Whereas the surf pool can handle 72 users a day, the whitewater feature allows for up to 80 people per hour. At nearly the same cost per hour for each activity, that’s a much higher margin for whitewater rafting. One other limiting factor that the facility has experienced is in family inclusivity. Many of the adventure activities currently on tap have an associated height limit, which makes it difficult for families with young children to experience all the activities they’d like to. The addition of more general water park features will take direct aim at this issue and should help broaden the appeal for the many families in Al Ain and surrounding areas.

We’re excited to stay in the loop with Lennard and his team at Wadi over the next few months to learn more about the upcoming additions. In the meantime, here’s a short video that lends an idea of what the overall Wadi experience is all about: