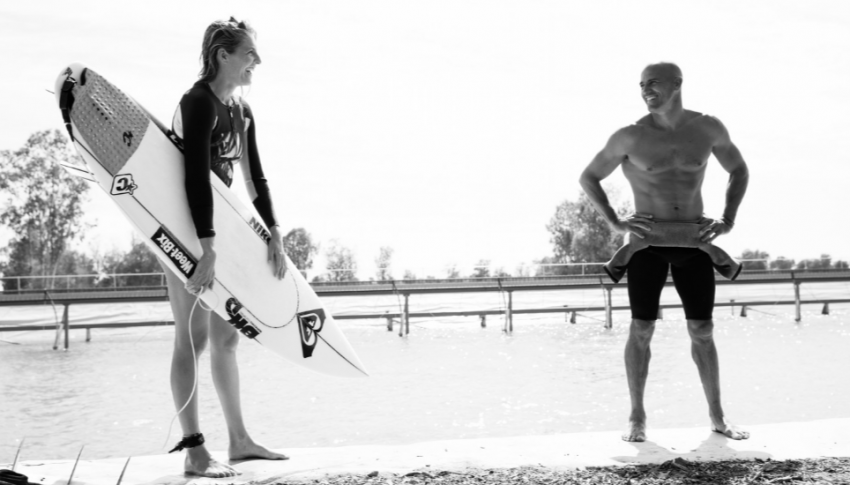 After a decade of R&D, Slater is inviting pro surfers like Stephanie Gilmore to test his artificial wave Photo: Todd Glaser

Kelly Slater is leading the charge to roll out a totally surfable wave pool. Will tech-savvy inventors beat him to it?

On December 15 last year, Kelly Slater made a key addition to his surfing résumé. That day he released a three-minute, 40-second video of himself gliding through a series of squat, glassy barrels. In the clip, the waves come one after another, and they’re perfect. They ought to be—they were the product of ten years of R&D by the Kelly Slater Wave Company in California’s Central Valley.

“It was the most incredible bit of surf pornography we’d ever seen,” says Jess Ponting, head of San ­Diego State University’s Center for Surf Research. “It was a one-video paradigm shift.” Artificial waves have been around for decades (see “A Brief History of Surf Parks,” below), but they’ve been puny—more gimmick than game changer. Slater’s may be the first that serious surfers actually want to ride. But his company is just one of at least a half-dozen racing to bring surf pools to those willing to pay to ride a consistent break—even if the ocean didn’t produce it.

“You could call it a wave war,” says Robert Reynolds, an investment banker and consultant who specializes in surf parks. “Within the industry, there’s quite a bit of drama.”

One of the men on the front lines is entrepreneur Doug Coors, who’s currently completing the NLand Surf Park in Austin, Texas. NLand uses technology from a Spanish company called ­Wavegarden, and its six-footers are good for 35-second rides through Texas Hill Country. (The waves in Slater’s video appear to be about four feet.) The park will also offer a barbecue pit and a brewery. “It’s the first of many we’ll develop,” says Coors. Slater, for his part, has been linked to plans for a park on San Diego’s waterfront. 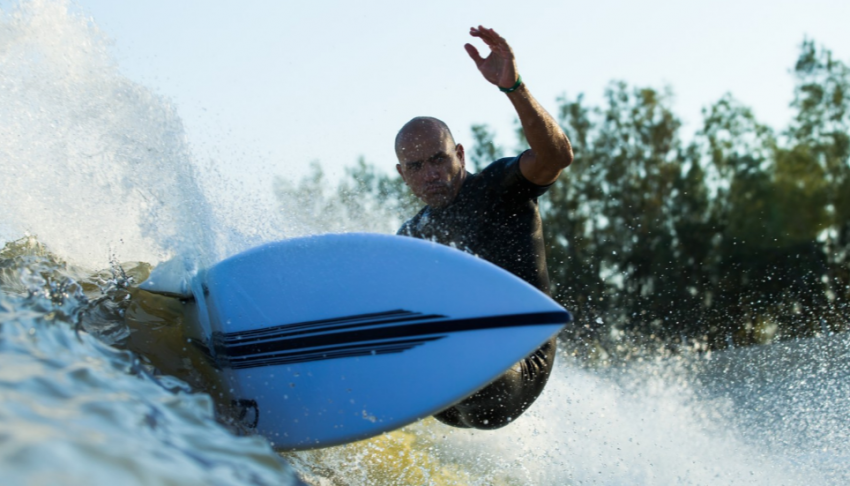 Building a surf park isn’t cheap—each pool costs about $20 million—but at least a dozen of them are scheduled to open in the next few years in Russia, Spain, and ­Hawaii, among other locations. The World Surf League snapped up Slater’s company this spring for an undisclosed sum, and there’s talk of adding a competition park to the World Tour or ­including artificial waves in future Olympics. “There are so many surfers in the world and a finite number of great spots,” says Wayne Bartholomew, former president of the Association of Surfing Professionals. “Being able to produce a wave that breaks 24/7 is really appealing.”

At least it’s appealing to businessmen. “Surfing’s more fulfilling in the ocean,” says Australian board shaper (and park designer) Greg Webber. “But when it’s beautiful and predictable, there’s a crowd.” Surf parks are geared toward people who may live hundreds of miles from the coast but want to try getting on a board. Promoters and entrepreneurs have been trying to reach those potentially lucrative customers for decades, with little success. What’s different now, says Tom Lochtefeld, owner of Wave Loch, is the technology. “It’s a space race,” he says.

Lochtefeld spent millions pursuing tech similar to Slater’s, which works by dragging an underwater sled across the bottom of the pool at a rapid clip. The ­resulting wave is beautiful, but riders must wait 90 seconds for the next one to roll by. That might be a problem from a business standpoint. Fewer waves per minute could mean fewer customers. Lochtefeld thinks he has a solution, in the form of a scale model that sits in his San Diego office. Perfect peelers—albeit only six inches tall—roll down a 40-foot-long tank every eight seconds, pushed along by puffs of air from pneumatic engines. The company plans to turn a canal in the Dutch city of Rotterdam into a wave pool and to use the technology at a park outside Bristol, England.

But a firm called American Wave Machines, located just north of San ­Diego, is trying to beat him to it. “Lochtefeld says that pneumatics are the greatest thing, but he didn’t even invent the system,” says Bruce McFarland, who owns AWM with his wife, ­Marie. Seventeen years ago, McFarland worked for Lochtefeld, and the breakup was not a clean one. After McFarland left Wave Loch, Lochte­feld filed for patent infringement. His suit was eventually thrown out, but the experience rankled the McFarland’s, even as they have their own plans to open a three-pool park outside New York City next year.

What differentiates AWM’s pneumatic system from the technologies used by Wave Loch and Slater, McFarland says, is that it’s customizable. “I’d call Kelly’s wave a point break, and it’s great,” says pro surfer Cheyne Magnusson, who is on retainer with AWM. “But here it’s pretty much wherever your imagination can take you. For a surfer, that’s mind-blowing.”

By way of demonstration, Magnusson grabs an iPad wired into a tank and ­begins firing off a series of vacuum chambers, which can shoot air at any ­angle. “I can hit all the chambers at once and make a big closeout, or do them in succession and make a simulated point, or do a combo swell where you shoot them at each other and make a peak,” says Magnusson. “It really gives you the kinds of dynamics the ocean throws at you. The first time I tried it, they had to drag me away.”

The industry is betting big that consumers will feel the same way. “People are ready,” says McFarland. “They saw the Slater wave. Now they want to know what’s next.”

A Brief History of Surf Parks

1985: The first surfing competition on an artificial wave takes place, in Allentown, Pennsylvania.

2012: Pro Sally Fitzgibbons learns to stick a reverse aerial at Wadi Adven­ture, a park outside Dubai.