Greg Webber’s decade-long creation could be realized by next summer with Tunnel Vision Wave Park if all goes to plan. 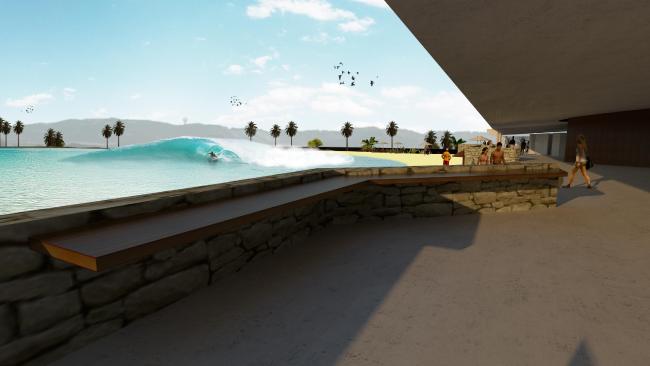 Posted on December 6, 2017
Quotes and information from Gold Coast Bulletin.

“We all have that vision of that perfect barrel we once had deeply burnt into our brain, so now we are recreating it.”

Tunnel Vision Holding Pty Ltd, directed by skate legend Ben Mackay has recently entered into a 20-year partnership with Webber Wave Pools to bring what will be known as Tunnel Vision Wave Park to Stapylton on the Gold Coast. The development plans which are to transform 95 hectares of farmland beside the Pacific Motorway are expected to be prepared by the end of the month.

Early claims are stating the wave park could manufacture 500 waves per hour that are as big as two meters.

Greg Webber, renowned board shaper- now wave pool developer, says he’s been designing the technology for the better part of a decade. He’s stated many times that this technology will be the best at creating waves.

In the heat of KSWC and Wavegarden’s Cove, Ben Mackay has made a point of saying that Tunnel Vision Wave Park would be “a park for the people, open to the millions of surfers that want to experience what will be an element in the future of surfing.”

He went on to call it, “a wave park not only for the elite, the exclusive, or the entitled few.”

This is Webber Wave Pools first partnership with a developer and Greg Webber is clearly stoked to get going on their first pool: “I really can’t believe our first pool is about to be built,” he went on to say, “it gives me 100 percent confidence that Webber Wave pools have partnered with the ultimate group.”

The acting mayor of Stapleton, Donna Gates, spoke on behalf of the local community and said that “it would be fantastic to have a new attraction on the northern end of the Gold Coast.”

If all goes to plan millions of Aussies will be getting 20-second shacks, not at Kirra but in a pool. We’ll stay on top of this project as new developments surface.